Everyone that participated in the Class Cruise of 2013 is now recovered from the trip and back in the swing of things back home thinking about the spring (if it ever manages to arrive) and beyond.

I think all in all the trip to Canaveral, the cruise itself, and the trip back home went pretty smoothly considering the logistics of 20 or so people all traveling different routes to get to the same place. No viruses, no engine problems, just relaxation, sunshine and good food and company.

Makes you want to go back to where it's warm and sunny; speaking of which, we held the Orange Beach Condo drawing 2 weeks ago. The winner was Karen Pfettscher Long Miller. She still has a couple of weeks to make arrangements with Gary Malin or she loses it to Larry Broerman, who was drawn as runner-up. Although not the smashing success of last year, the drawing still managed to raise quite a bit toward funding the Pig in the Park celebration in the summer of 2014.

And we're not done yet! At the suggestion of Carolyn Johnston Warnick and Terry Hudson who prevailed on Linda and Tonja Rosso Duncan to help organize a 50th reunion of the West Terrace class of 1963. From preliminary contacts, looks to be at least 15 or more -attending a school tour by the current principal and a get together afterwards on Saturday, June 8 (schedule dictated by the availability of the principal). Specifics will be announced as soon as possible. The entire low cost function will probably be funded by a simple pass the hat among the attendees.
Posted by Milton at 5:54 AM No comments: Links to this post 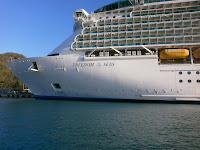 We're back from the Class Cruise 2013 and nearly everyone that participated is recovering if not from colds they've caught from airplane traveling passengers or somewhere then from the shock of returning to arctic cold and work and  all the routines of home.

It is hard to believe that just a few weeks ago we were on a floating city, a ship of opulent extravagance and considerable grace. Even though it can be difficult to understand after the first morning that breakfast doesn't just appear but must be made, and that after meals dishes don't just disappear but must be cleared and washed, it's still always good to get home.

Best of all, the people with whom you just shared a marvelous vacation are still here to share fellowship and friendship at home too. I've heard that some of the first time cruisers are already scheming their next cruises. Ours is already booked for May.

First things first though. The Condo drawing will take place on March 10 at the West Side (Pearl Drive) Hacienda at 3:30 (that's PM, by the way). That's something to look forward to and we hope to see as many as we can pack into Hacienda for the drawing for the fabulous Orange Beach condo beach vacation. It's a great location and a great place to unwind. Best of luck to all the entrants.

By the way, the West Terrace School kids are organizing a 50th Grade school reunion for early this summer. Wouldn't it be great if we had similar gatherings of other grade school groups?  We're just sayin'......................

Not ones to rest on laurels, we are starting to give some thought to the Pig in the Park in 2014. Well, in truth, I was actually eating ribs at Wilson's BBQ, lamenting the demise of Steptoes and trying to figure out an excuse to go to Owensboro, when I happened to think of the next class event. That's about as far as we've actually gotten but there's still time enough for that.....

And finally, as a parting shot:

Posted by Milton at 7:34 PM No comments: Links to this post